I signed up for the Paladins Closed beta a about two months ago. To be honest, I didn’t fully know what I was signing up for. There wasn’t a ton of information on the game, other than it was a Hero Shooter. In all honesty the lack of information is part of what drew me to the game…also Paladin is my favorite RPG class, so the name instantly grabbed me.

In a Hero Shooter you have a roster of characters to select from (referred to as, heroes, gods, champions, duckies, whatever, etc) each with their own special abilities and includes various game modes, the main one usually involving an objective. I had honestly forgotten I applied, until I got this email granting me beta access.

From The Makers Of SMITE… I was so oblivious when signing up, I didn’t realize Paladins is being developed by HiRez Studios who are best known for the 3rd Person MOBA SMITE. I had just gotten into SMITE recently, so HiRez was already well on my radar. It couldn’t have been more perfect.

When I booted up the game, the first thing I did was check out the roster of characters. The bright cartoonist art style reminded me vaguely of an animation that you might see on a Saturday morning. All of the characters seemed like there was care put into their designs. The animations are nice and fluid, and even though there’s no descriptions for any of them, they all have a lot of personality.

Damage Champions tend to have moderate health, and focus on dealing damage from the back lines. Tanks have larger health pools, and specialize in absorbing damage, holding objectives and protecting team mates. Supports strike a balance of offence and defense. Flanks focus on getting in to take out specific targets, and then getting out.

All characters have skills bound to left mouse button, right mouse button, Q, and F keys, with an ultimate skill bound to E. Much like a MOBA of MMO the skills all have varied cool down times, and are meant for specific situations based on the Champions role and positioning the other players. 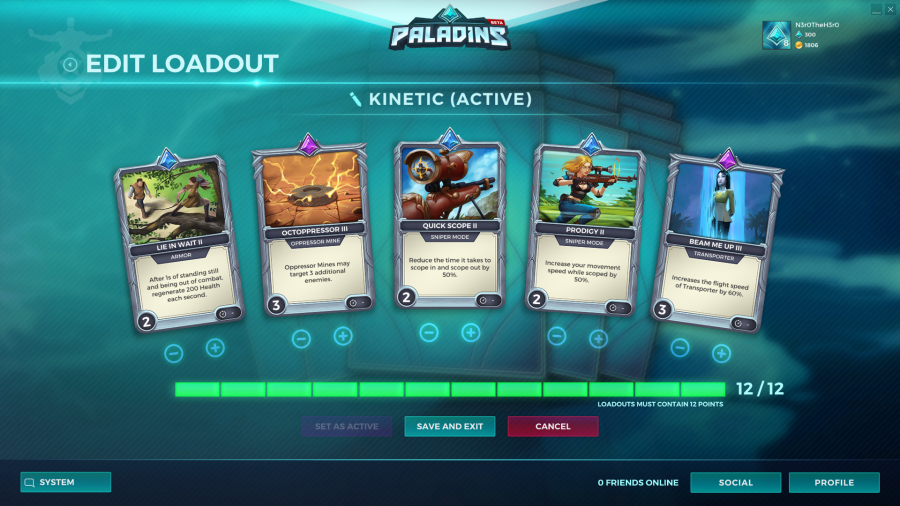 The skills and stats of the selected Champion can be augmented by use of loadout cards. All Champions start with a default loadout. Additional cards can be earned by leveling up and obtaining loot crates which reward you with 3 random load-out cards. A load-out can have a maximum of 5 Cards.

Each card can be set to levels 1-4, however you only have 12 load-out points to distribute. This is where some planing and meta-type strategy comes in. I like this aspect of the game. It borrows from the item loadout system in  traditional MOBA and applies it to a shooter.

In addition to loadout cards, burn cards can also be purchased just before a round begins. These are purchased with points earned from playing the round, but you’re also given some at the start. This adds an even further level of character loadout customization, and can make for some very interesting and effective combos.

From what I’ve seen of past updates, this card system has gone through many revisions, so I’m interested to see where it ends up. It adds a level to the game in a way I haven’t seen before, so I hope it doesn’t change too drastically. 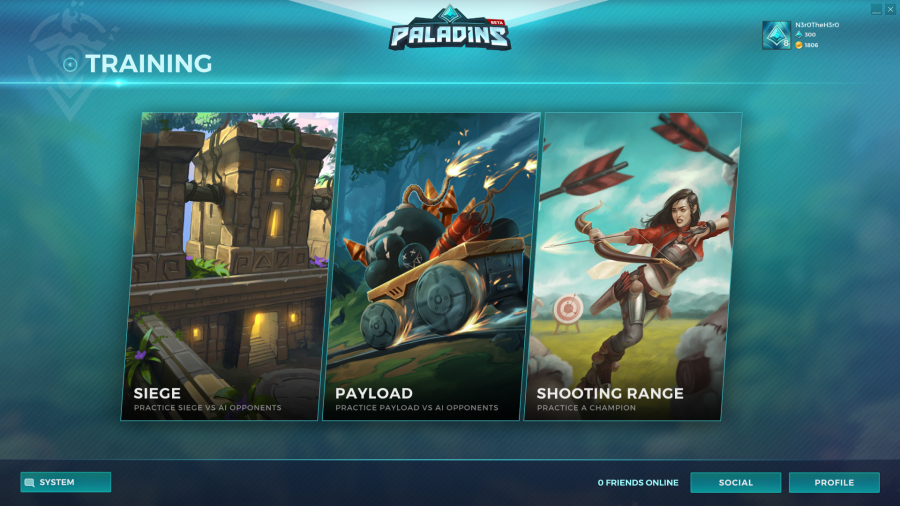 I was far too shy to delve into the online competitive mode, for fear of getting my butt kicked inside out. Lucky for me, there is a training mode  that lets you play against AI controlled opponents. Real players can join the game, but they will always be on your side, essentially making it a co-op mode. This was right up my ally!

There’s also Payload mode. It’s similar to Siege minus the capture point. Both teams take turns either attacking or defending. There are also checkpoints along the way that add time to the time limit. Same rules apply to pushing the payload.

How Does It Play?

Paladins is being developed using the Unreal Engine 3, so I felt right at home with the controls. I tried out a few characters to see how the game played, and also to see who would be my main. I started by using Viktor, at the time he was the newest addition to the roster. His skills were laid out to perfectly reflect most first person shooters; he has a sprint ability, is able to aim down his iron sights, and throw cook-able grenades. His ultimate is the Paladins equivalent to calling in an airstrike in CoD, a perfect move to clear out an objective point so your team can move in and capture. Nothing too fancy, but he’s a damage type and can put the hurt on most any other champion if not properly dealt with. 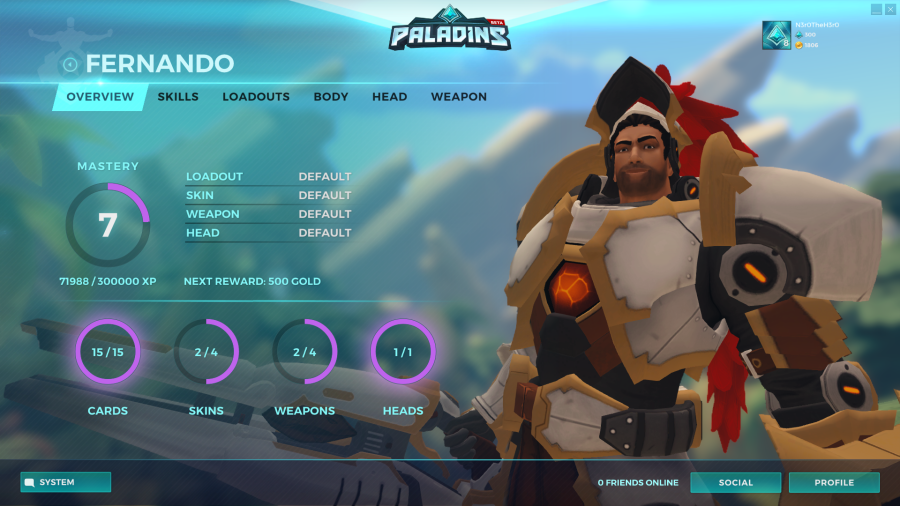 Fernando is a tank, in case you couldn’t tell from his armor clad frame. He wields a flame lance (flame thrower) and carries a large shield. He has a large amount of health, and is able to take a fair amount of damage before having to retreat. His flame thrower has limited range, but one of his skills is a big fireball that can hit enemies at range, and does +100 damage to each consecutive enemy it hits. Using his shield move greatly expands his shield which blocks enemy fire while allowing team mates to fire through. I can see this move working well in tandem with a damage type. His movement skill is a dash, that gives a quick boost of speed while at the same time running through any enemies in his path, a great finisher and escape move. His ultimate grants him invincibility frames for a limited time, a literal life saver for when I needed to hold my own until the rest of my team showed up. 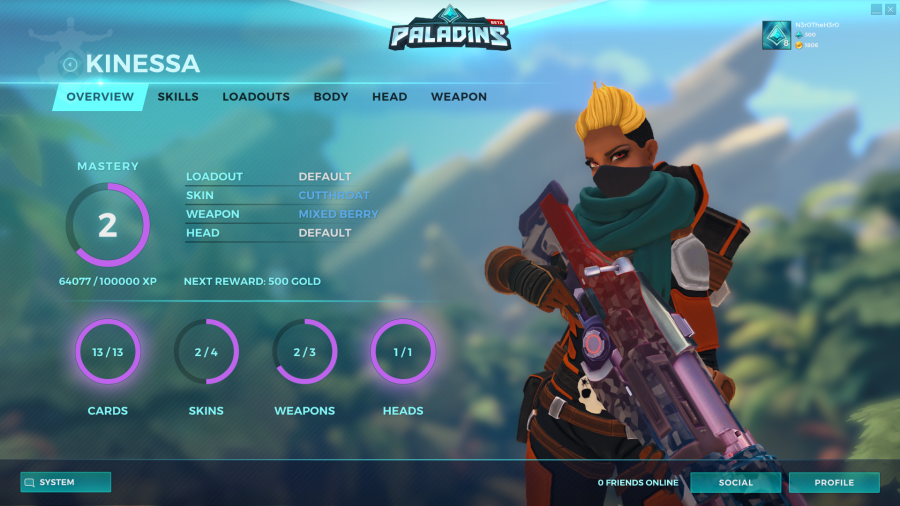 Kinessa is the most interesting of all the characters I tried, mainly because she’s a sniper and I strongly dislike playing sniper roles. She played similar to Viktor, with some minor differences. Her movement/escape ability is a transporter, which works kind of like the ‘blink’ ability in Dishonored. Her main weapon is a Sniper/Carbine hybrid. At short distance, it’s a rapid fire carbine, and aiming down the sight activates sniper mode. While scoped, your shots can then charge to do additional damage. Charged shots can do loads of damage, but also uses more ammo (up to 5 rounds for a fully charged shot). She also has mines that once deployed, slow opponents who come near them. Her ultimate gives you temporary unlimited sniper shots and increased damage if you hit your target above the waist.

I played mostly PvE, but did a fair bit of PvP and didn’t do horribly! I even gained a few friend requests so my  performance must have at least been adequate.

One thing that caught my attention was the fact that you can use mounts. That’s right, mounts in a first person shooter. Initially you could summon a mount when ever you wanted to. Since then there have been updates that limit the ability to use a mount to the beginning of the match when both teams are racing for the capture point.

As far as performance goes, I have a pretty decent rig and Paladins runs very smoothly on my machine. The minimum requirements are pretty reasonable so most machines should be able to run it. I included the recommended specs as well as my own below: Paladins is a constantly evolving beast. While most games would have the game design more or less set in stone by the beta phase, Paladins has seen several big changes throughout it’s updates. Some of the players like this, others absolutely hate it. I say “Do you HiRez, do you…”

While there are some changes I’d like to see return, I’m still liking the direction the game is heading in. It’s fast paced, fun, and casual friendly. HiRez seems to be very active when it comes to listening to their community. Which will only help the game become stronger as it continues to develop. Paladins will be a free to play title once it’s out of beta, so you have nothing to lose giving it a try.

There’s a few ways to get a beta key. You can follow Paladins on twitter for a chance to win in a give away. You can also purchase a Founders Pack which gives you instant beta access but also unlocks all present and future champions, an exclusive Ares skin for Fernando, another awesome fiery mount skin, and 20 loot chests containing random loadout cards. You can purchase a beta key (not founders) on G2A for about 50 cents. Or…OR you could butter up someone who’s already in the beta and have them send you an invite link.

Edit: Now all you have to do is sign up on the main site and play. (Founders Pack is still available for purchase).

If you’re looking for a new shooter to try, give Paladins a shot. It’s fast paced, lots of fun, and easy to get into. So far it’s looking great, and I look forward to what the HiRez development team has planned for us.

2 thoughts on “Paladins: Champions Of The Realm Open Beta”