When the Steam Controller was released, it was met with very mixed reviews and became the subject of several heated debates. It pretty much comes down to this; some think it sucks, others think it doesn’t suck. I decided to grab one and see for myself. 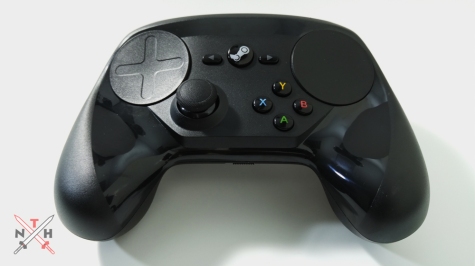 The Steam Controller, like many other controllers is made of plastic. The majority is covered in a matte black finish, with a glossy strip wrapping around the front face of the device. It comes with a receiver and a USB cable to either plug the controller into your PC, or extend the range of the receiver.

The dual track-pads take up most of the face with a single analog stick to the bottom left. All three can be pressed to be used for additional bindings. The face buttons A,B,X, and Y sit to the right. In the center is the start, menu/back buttons and a big Steam button right in the middle which opens Big Picture mode. 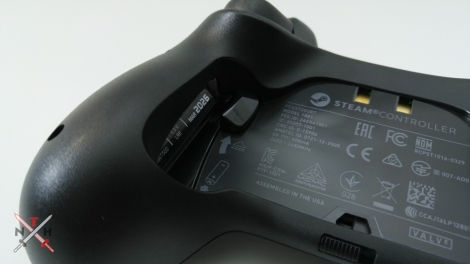 The controller has a set of 2 bumpers and 2 triggers. There are two additional paddles on the back side of the controller, which doubles as the battery door. The Steam Controller takes 2 AA batteries. There’s also a micro USB port on the very top of the controller if batteries aren’t available or dead.

The ergonomics felt familiar enough. I have large paws, and none of my digits feel left out when holding the Steam Controller in my hands, especially with the paddles on the back. The face button layout took some getting used to. I found myself accidentally hitting the B button when meaning to hit A, but I soon learned to adjust. The triggers have a much shorter travel distance than what I’m used to. They also click when it has been pressed down all the way. I like tactile feedback, it’s neat. 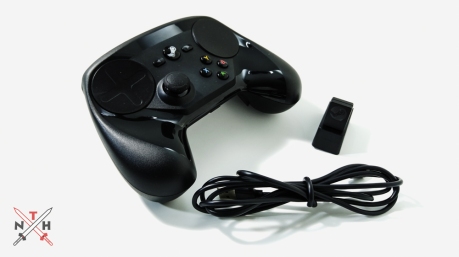 The dual track-pads are very interesting. The left one acts as the obligatory D-Pad, while the right is used for camera controls or aiming. I tried the Steam Controller with several different games; Burnout Paradise, Half Life 2, Sonic Racing Transformed, DMC: Devil May Cry, Saints Row 4, 20xx, Dark Souls and Paladins. Using a touch-pad instead of an analog stick for shooters was wretched at first. I couldn’t aim, track, or even strafe well enough to save my life. Just like anything new, I got better at it with practice.

Both touch pads have HD haptic feedback. Haptic feedback is a feature that is similar to the Rumble feature in most modern controllers today. It uses a teeny tiny motor to create vibrations that let you know you are interacting with the device more specifically the track-pad. There’s audio feed back as well.

The Steam Controller is meant for being able to use a controller with PC games that don’t have native or full controller support initially. Using Big Picture Mode, you can do a lot of customization as far as key bindings. The track pad can be set to emulate an analog stick, and a track ball. When playing shooters, I found that I preferred the trackball setting as it felt more accurate. Did I mention it also has motion aiming? When enabled, you can hold down the right track pad to allow you to use the built in gyroscope to aim, or change the camera perspective…nifty!

The Steam Controller doesn’t suck…but it is different…which may suck for some of you. If you’re the kind of gamer that loves their Xbox or PlayStation controller, and don’t want to try something new, stay away from this one. If you’re a PC gamer looking for a controller that gives you more..well..control, give this a shot!

The Existential Egg has a phenomenal series that covers The Steam Controller, definitely check out his content if you’re interested in learning more! https://www.youtube.com/playlist?list=PLMV7bfY2SzbWoR01Gz3nzb5_rMd83jaGb